A large and very disparate crowd

Although it is estimated that 5 million households in the world farm cocoa for money, there are about 45 to 50 million people involved in the global chocolate trade. About two third of cocoa beans are produced by small farmers earning less than $1000 a year from it. Because of their small size, most of them lack access to essential resources and knowledge, such as bean characteristics, investment and marketing expertise. This results in poor quality beans, low prices and limited expansion in the production of a good chocolate. This is very damaging to everyone at a time when high quality chocolate is enjoying a constant growth in demand.
There are approximately 750 chocolate companies in the U.S. and more than 2000 in the EU. This is reflected in the consumption levels of these respective markets.

The coming bomb of climate change

Over 50% of the world cocoa production comes from the West African countries of Ivory Coast and Ghana, another 17% come from Indonesia. In a recent release of its study on the impact of climate change, the International Center for Tropical Agriculture concludes that those two countries alone will have a vastly different topography in thirty years than now. The rise in temperature and a different pattern of rainfall will require cocoa fields to be moved higher in regions that are not currently available for agriculture because they are already used for habitation or other purposes. With cocoa beans generating close to 8% of Ivory Coast’ GDP, a reduction in revenue will likely have a deep social and political impact on the country.   At the same time, it is estimated that the demand for cocoa bean will double by 2050. This mismatch will result in price increases but could also destroy the livelihood of millions of farmers.

A glimpse of hope

To fight the effect of elevated temperatures and hectic rainfall, farmers in these regions could revert to the old production style of planting cocoa trees in the shade of larger trees as they did prior to the development of intensive production methods. If this is the solution, it will initially require large investments to re-organize the soil and time to let the larger trees grow. Both items that small farmers have in rather short supply. 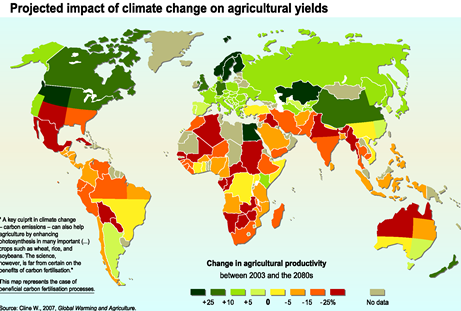